Dana wanted to make sure that Ken didn't mean Show World in NYC.

I have been to both. I brought back a Shell Dolphin Statue from Shell World and put it in my living room. I brought something back from Show World, too. The doctor gave me a cream and it went away in a couple weeks.

There are actually quite a few places named Shell World in Florida. I am not sure which one Ken and Dana went to but it was probably this one in Key Largo: 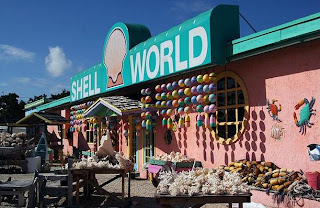 Shell World Key Largo has something for everyone from shells for around the house to formal shells for a night out on the town.

Sounds amazing... but the one in Orlando has a shell golf cart. Posted by Guy Hutchinson at 5:14 AM

Been there a hundred times. It was tradition to stop at Shell World whenever we'd head down to dinner at our favorite Key Largo eatery, Senior Frijoles.

Senor Frijoles may be the greatest name for a restaurant ever.

Yeah, it's a great name. Also, the finest chips and salsa in the keys.

There are actually two Shell World stores in Key Largo. One store is at Mile Marker 106, and the other is at Mile Marker 98. Both stores have been operated by the same family for more than fifty years. Note: the mile marker system in the Florida Keys indicates the distance from Key West.