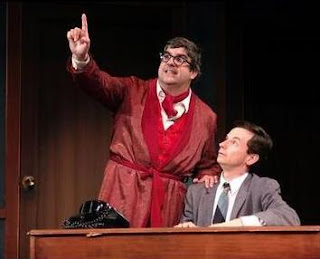 Dana will be on stage in beautiful Vero Beach, Florida in less than 2 months. Dana will be playing the role of Max Bialystock in the Riverside Theatre production of The Producers.

The Producers is based on the 1968 Mel Brooks comedy and may be the ultimate musical about musicals. Dana is perfectly cast as the short tempered and sarcastic Bialystock, a role originally played by Zero Mostel.

Buy a ticket, mark your calendar and start looking for a flight to Vero Beach.
2011 is lookin' good!
Posted by Guy Hutchinson at 12:47 PM

I want to see this so bad.

Alas, unless this is performed at Dragon*Con, I'm unlikely to ever see it :(

Yeah, it should be a great show! However, Dana performing The Producers at Dragon*Con with Plumey playing Leo Bloom would be so awesome the world would explode.

It's an amazing show :) I love having the opportunity to spot Mr. Snyder :)

Ah fooey, I wasn't in Florida, but I wish I had at least known about this. Dana is perfect for that part!