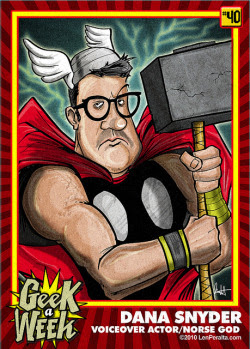 The details of my demise something something... Suffice it to say, making things awesome in parallel universes takes up a lot of time.
On the flip side, I have to say that Doc Weens has been doing an astronomical job on this blog and I humbly welcome him to Team Snydecast. Having said that...

Dana's been known to cross over onto other podcasts, but I found these two this afternoon and thought I would share:
Geek-A-Week Podcast: Len Paralta's (who also has done art for some of Ken's work, including There's A Zombie In My Treehouse.) Art Project where he will be connecting with 52 different Geeks from different parts of Geekdom in 52 weeks. Dana comes in at #40 with this awesome Thor caricature (left.)
This American Wife: Hosted by Epic Magazine's Ned Hepburn. Ned's co-host Eric Martin has the privilege of sitting down with Dana to talk about serious issues such as Steven Segal, Richard Simmons, and slot machines.
Subsequently, if you're not tired of listening to Dana (and honestly, why would you be?) I highly recommend a little podcast known as [adult swim] central presents colon [adult swim] Swimcast Intended for the Internet where yours' truly, the lovely Trish Henson, and the rest of our merry band of [as]central misfits chat with Dana about cats, Chowder, George Lowe, Mr. Magorium's Wonder Emporium, and... Rice.
Posted by John J. at 2:03 PM