Perhaps shaving with Abe Lincoln or splitting a box of Ho Ho’s with The Golden Girls would measure up to the magnitude of eating with Skipper, but I doubt it (unless Abe lets you wear his hat, then all bets are off.) 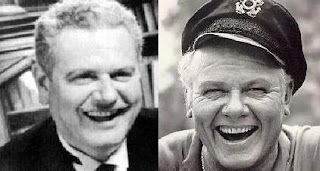 TRIVIA: Dropping the “Jr.” is street slang drinking a small bottle of liquor concealed in a sandwich.

But the big attraction was Hale himself who made the rounds at the eatery to the delight of the customers. At the restaurant (and most other places) he would wear his signature captain’s hat.

Eventually, the Lobster Barrel closed its doors and Hale started a new business venture, a travel company. I am sure the “three hour tour” jokes eventually turned the receptionist into a raging alcoholic.
Posted by Guy Hutchinson at 7:01 AM