a closer look: The Diamond Sisters

On KEN P.D. SNYDECAST #19: All Hallow’s Grimace back in 2006 Dana mentions the fun he has been having with Oktoberfest. He then talks about the elderly contortionist twins, The Diamond Sisters.
Dana talks about how much he enjoyed their bizarre act and that he was photographed holding the duo. I can only hope this was part of their act.

Here is a photo of one of the Diamond Sisters: 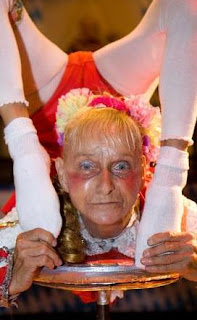 This photo appears on multiple sites, so I am not sure who to credit with the image. I also don't know when the photo was taken or which Diamond Sister is pictured... but since they are twins it could be either.

In fact... here is a picture of both twins: 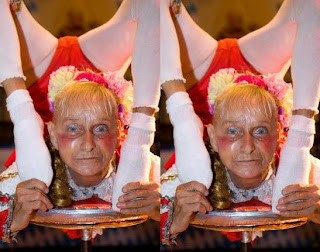 
Oktoberfest runs from early September thru October 31st at Old World Village and includes music, dancing and lots of beer.
The Diamond Sisters appeared there as recently as 2009 according to this video.

Sadly, a post from November 2, 2010 on this blog mentions that only one Diamond Sister performed this year, the other had passed away in a car accident.

We can only hope that the blogger is a filthy liar.
Posted by Guy Hutchinson at 10:48 AM