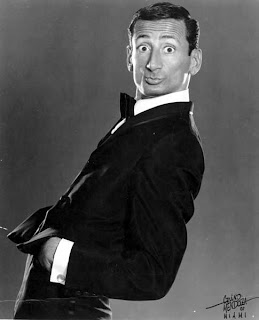 On Ken P. D. Snydecast #164: Every Day’s A Holly-Day Dana and Ken had the following exchange about dinner Dana had at the Rustic Inn:

Dana: I went there with a very sweet beautiful girl. Who was friends... her family... she grew up with...
Ken: Scott Baio.
Dana: No. A younger...
Ken: Charlie Callas.
Dana: I can't remember who it is. You're trying to be funny and it trumps everything.
Ken: Dick Butkis.
Dana: Bristol Palin.
Ken: That was funny?
Dana: No. I didn't say it was funny.
Ken: That trumps everything, though?
Dana: 'cause it's crazy.
Ken: O.K.
Dana: Yeah. Charlie Callas... no one even knows who you're talkin' about.

Well, get ready for some knowledge.

Charlie Callas is an American comedian best know for his work with Mel Brooks and Martin & Lewis. His stand-up was a fixture on television talk shows in the 1970s.

His two most recent TV appearances were on the Larry the Cable Guy Christmas in 2007 and 2008. Over the years he has been on everything from The Monkees to The Munsters and provided the voice of Elliot the dragon in the Disney classic Pete's Dragon.

Here is a classic bit of buffoonery with Callas and Snydecast fav Dom DeLuise:

Posted by Guy Hutchinson at 5:23 AM