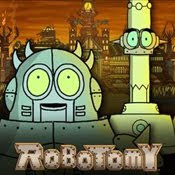 Put on your television pants and find a comfy spot on the couch!
Tonight, Wednesday 12/8/2010, Cartoon Network is re-airing the first episode of Robotomy at 7:15pm. Robotomy is a toon about killer robots. Dana provides the voice of Dreadnot "a sadistic teacher that finds joy in torturing and invoking pain into his students."

Then you can get up and stretch, have a smoke and use the bathroom... but don't take too long because at 9:30pm the MAD cartoon series (based on the magazine) is also on Cartoon Network. Dana has done work on several episodes of the series including "Fantastic Megan Fox/Mad vs. Wild" which airs tonight.

After that [adult swim] starts and if you keep your tv on you will undoubtedly hear his voice about 50 more times before you go to bed.
Posted by Guy Hutchinson at 10:06 AM

Too bad Robotomy is such a bad cartoon. even the wonderful tones of Dana can't save this pile of dookie.

The Mad cartoon was, as most sketch shows are, hit and miss.
But the segment on Klaus' Shoe Garden that Dana voiced was hysterical.

"Feet too big for normal shoes? We'll make ya a pair out of lettuce."