Ken P. D. Snyde-Cast #36: The Snydes features plenty of talk of The Smurfs.

Much of the podcast talks about The Snydes, a rip off of the Smurfs where every character would be a tiny blue Dana... except for Plumegamel. 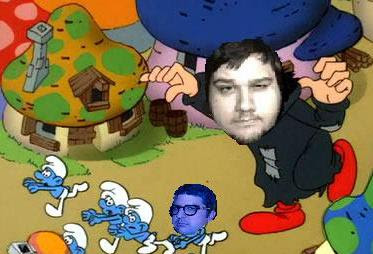 Sadly, that is not the movie in theaters today.

Anyhoo, here are some retro commercials that shows that the world was even more saturated with Smurfs in the 80s.

First up is this commercial for the Smurf Power Cycle and other Smurf vehicles. It's a bit odd. First Smurfette runs in holding some kind of VHS tape to show the 'Smurfs Test Track' where products are "tested on real kids". Then comes my favorite line ever...

Next is a commercial for Smurf Yogurt... or lobster and pickles. It's hard to tell.


This commercial is for a Smurf's Christmas album that is as awful as you can imagine:


Finally, this commercial for the Smurfs video game.

Dads are stupid. Smurf them.
Posted by Guy Hutchinson at 3:17 AM