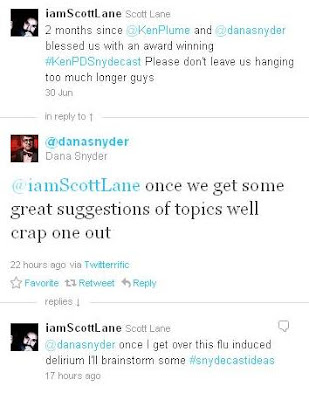 Seriously? This is a podcast that has done THREE SHOWS where they talked about toilets.

First there was KEN P.D. SNYDECAST #113: Nuts On The Snyde Part 2 where Dana had just returned from the bathroom and was surprised that each stall had a real door and was like "a little room".

Then the marine toilet in KEN P.D. SNYDECAST #69: One Fish Two Fish?

And let's not forget the discussion for the ages that was KEN P.D. SNYDECAST #139: Glass Toilet.

But, if ideas are needed, then ideas we shall give him!

Send @danasnyder a tweet, or email him at kenpdsnydecast@gmail.com, or email me at drwienerbreathesq@gmail.com and I will post it here on the Experience, or just put a note in the comments.

I have been waiting since 2007 for the boys to give us the Co-Stars record experience that they talked about on KEN P.D. SNYDECAST #26: The Bunny Hop.

They talked about doing one of two things. Either acting opposite the existing Co-Stars record or creating new Co-Stars "records" that you could act with at home, one with Plumey & one with Snydely.

Here is a video I put together to explain the wonder that is the Co-Stars record:

Ken's Birthday!! Project Dalek, Supercon, SquareApp, shows at Arrowrock, plug The Space Coast Movie again and lastly, Dana asked for a list of voice actors a while back that people followed so they could discuss them in some capacity. I don't remember that ever coming up.

Dana could talk about how I drove from St. Louis to Arrow Rock to see him in The Sound Of Music and informed him after the show that I have listened to every single Snydecast. He seemed surprised when I told him this. Actually, I just want that to happen for the satiation of my ego. Doesn't everyone want a shout out on their favorite podcast? But I do think that he should talk about his experiences in Missouri from this summer. Luckily I get to see him again the last night before he heads home!

Would you settle for a shout out on The Experience? No? Neither would I. ;)