The Producers in Vero Beach... time is running out

Dana's run on the Vero Beach stage is coming to a close on March 20th. You have just a few more chances to see a performance that has been cheered by audiences and critic's alike:


"Dana Snyder, who plays Max Bialystock brings his chops not only as an actor, but as a cartoon voice to his perfectly pitched portrayal of the down-on-his-luck producer." Marilyn Bauer, TCPalm


Of course, it's not a one man show. The Riverside Theatre production of The Producers has a talented cast and is a magnificent production. It really is a spectacle.

Christina Tascon of planetvero.com calls it "A truly funny and visually stunning show!" 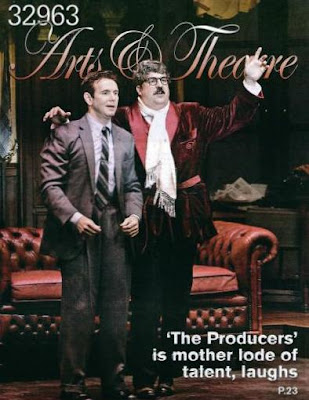 If you have the ability to get to Vero Beach, go and see The Producers before the curtain closes on March 20th.

You can read the above reviews in full by visiting here.
Posted by Guy Hutchinson at 5:10 AM