a closer look: The Atlanta Cyclorama

On KEN P.D. SNYDECAST #39: Bizzaro-Cast the boys talk ofThe Atlanta Cyclorama which Dana calls "the world's most bizzare tourist attraction" and says "It tells the story of the Civil War and the burning of Atlanta in full 360 degree…uh... something. I don't know really what."

However, the attraction's website describes the Cyclorama as follows:

The Cyclorama of the Battle of Atlanta is the world's largest oil painting, painted in 1885-86 by artists from Germany. It has been shown in Grant Park since 1893.
The three-dimensional foreground, called a diorama, was added in 1936, bringing a depth of 30 feet to the display.

Here is a great photo from this site: 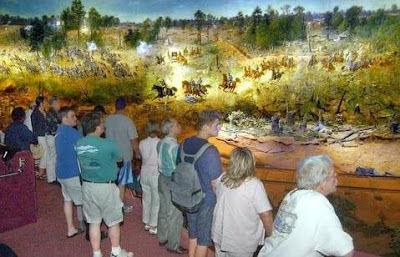 This a great photo of Clark Gable and Vivian Leigh touring the exhibit in 1939: 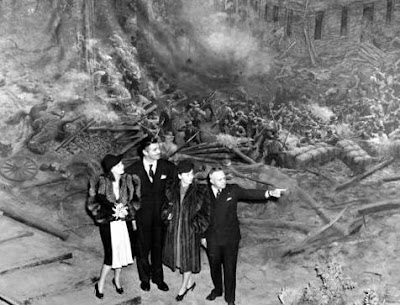 Finally, this is a unique news clip that shows how volunteers care for "the world's most bizzare tourist attraction":

Posted by Guy Hutchinson at 4:30 AM