On KEN P.D. SNYDECAST #20: Pachinko Fever the boys spend most of the podcast talking about Japanese gambling machines.

Pachinko is often described as a cross between a slot machine and a pinball machine... but really it's a unique game that is different than slots or pinballs. 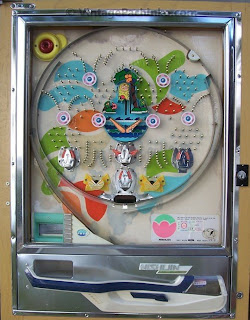 The vintage pachinko is a machine where you shoot a small metal ball into a field of pins. Most balls will fall to the bottom but some will fall into small pockets where they will 'pay out' and you get more balls. When you finish you trade your pachinko balls in for prizes (stuff like tobacco and perfume... not stuffed animals and spider rings.)

Japanese law forbids gambling, so you cannot trade the balls for cash. However there are stores nearby the pachinko parlor that will give you cash for your prizes.

The bottom line is that eventually some machines are taken out of the pachinko parlor and end up in America for sale.

Dana and Ken were talking about the more modern pachinko machines. The modern machines have a large display in the center of the playing field that plays video clips and usually has a matching number goal (similar to a slot machine.)

Dana mentioned that many of the popular pachinko machines were based on American franchises like the Rocky Balboa pachinko: 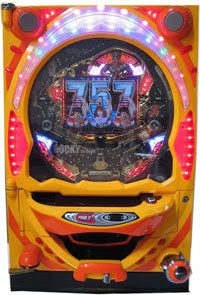 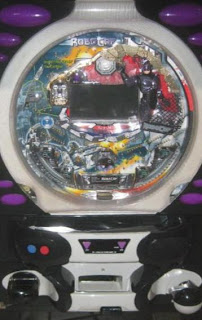 And the Popeye pachinko: 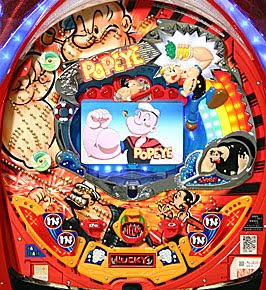 Dana talked about some of "super Japanese" pachinko machines that have a Japanese theme and seem extra weird to American audiences.

Below is a two minute video of the gameplay of Super Sea Story. In it you see turtles racing against fish. Then they all start dancing to steel drum music. Then a big breasted anime character swims up and the fish starts kissing her. Then more with the turtle... but then the fish starts kissing the anime character again. This fish is insatiable. Then a large whale swims onto the screen and just hovers in front of you.

The video also gives you a good idea of how bright, noisy and fun pachinko is.

Posted by Guy Hutchinson at 5:15 AM

Interesting article! I would like to know more about the pachinko technique!