Flipping through the iTunes reviews of the Ken P. D. Snydecast I found this, rather interesting, review:

Love the podcast guys! Keep it up. It really is funny and a good listen that doesn't go over an hour. You'll enjoy it if you like random humor. However podcast #143 was painful... The rest is fantastic!

If you haven't heard this episode [SPOILER WARNING] in the episode Dana was looking at Michael Jordan's Twitter page and noticed the four people he was following:

I wouldn't call it painful, though. Ken's despair and Dana's insistence on his continuing with the guessing game makes it a very fun listen.

If you were listening to the episodes at the time (April 2010) and didn't look up Michael Jordan's Twitter page it was a fun game to guess along with.

If you look up Micheal Jordan's Twitter page today you won't find it... at least the one Dana was reading from. 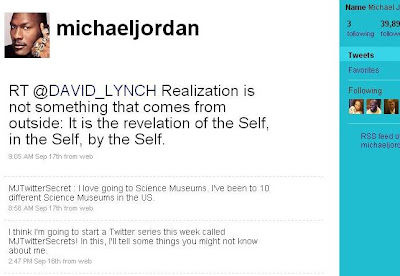 That account turned out to be a FAKE. It was full of posts that seemed slightly off the wall - but not enough to be sure it was a parody.

The account was eventually suspended by Twitter, but not before it put out dozens of marvelously weird tweets.


Wrestlers in the 80s were like fat uncles, now they are all monster men. I liked it better before.
10:46 PM Aug 12th from web


I think I'm done with eating Green peppers. They are the worst pepper, and always make a meal worse.
9:32 AM May 8th via web


I had a dream last night about lots of cats and enormous rabbits in a barn.
10:30 AM Jun 18th via web


I'm having another root beer tonight. Is this too many root beers in too many days? Tomorrow, I promise : no more root beer.
7:33 PM Aug 3rd from web