KEN P.D. SNYDECAST #166: What’s New Wit You featured an abridged discussion of the glassbottom boat tour that Ken and Dana took in 2008.

The trip was explained in much greater detail in KEN P.D. SNYDECAST #69: One Fish Two Fish.

The show is one of the funniest episodes of the Ken P. D. Snydecast and deserves a second listen.

Here is a passage from the show where Dana explains the concept of a marine toilet:

"Let me explain what a marine toilet is. That means… ok imagine you have to take- OK gang, imagine you gotta take a poop. So you take the poop in the marine toilet. But guess what… you wipe your little buttocks with paper or whatever you wanna wipe it with, but none of that stuff goes in the toilet. The only stuff that goes in the toilet is the stuff that comes out of your body. Because, guess what, back to the sea."

Then Dana offers up the following hypothesis:

"Had they put the marine toilet in the front of the (glassbottom) boat and as we're driving out there you see this big fat lady go in and sit down and then (we look down) and 'what's that! Oh god!'"

The story tells about the horrors of the sea and the importance of Dramamine. 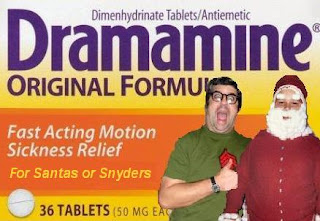 The episode also includes a visit to a fan named Jasmine's website (that site doesn't seem to exist anymore) and read her review of the Snydecast (which is on the web here.)

To read some things Jasmine has written since 2008 click here.

The show then spends a bit of time talking about Whatnot Muppets.

KEN P.D. SNYDECAST #69: One Fish Two Fish is a great episode and you should bring it back for your next multi-task session.
Posted by Guy Hutchinson at 3:01 AM