On the most recent Snydecast,
KEN P.D. SNYDECAST #172: ButterBore, Dana mentions an upcoming trip to New York and some stage shows he hopes to see.

Ken asks if he will be seeing The Addams Family to see how miserable Nathan Lane looks (and heckle him about how Dana improved upon his part in The Producers.) 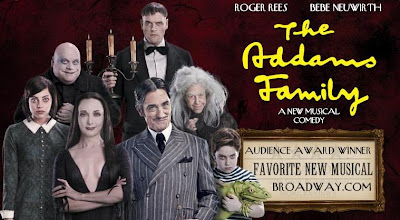 Dana points out that Nathan Lane has left the show, replaced by Roger Rees. Rees may be best remembered by "Cheers" fans for being on the show "Cheers".

Rees played Robin Colcord, a rich man who courted Rebbecca Howe. Bebe Neuwirth stars opposite him in "The Addams Family" and she was also on "Cheers" playing Frasier's wife Lilith. 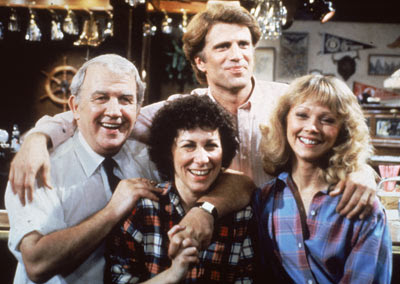 Wow, they should totally do a "Cheers" musical with Ken and Dana playing Cliff and Norm... interchangeably. Until they step through the curtain and you see which one has the mailman costume on... you just won't know who is who.

It would be sensational.

Anyway, Dana says he wont be seeing "The Addams Family" musical. That doesn't mean you can't see it!

Here take a look at these clips... then drive yourself to Broadway... maybe you will see Dana ducking into a better show as you drive to see "The Addams Family"!

During the show, scream out "What is this crap? Where is Herman Munster?" they will love you!
Posted by Guy Hutchinson at 4:12 AM