a closer look: The Maharaja Pez

Back in episode 5, Bed Buggin' the boys talked about a $500 Boba Fett helmet that was newly released.
Ken asked Dana what was the most expensive collectible Dana has bought. Dana scoffed at the question saying he never paid more than a hundred dollars for such a thing. Dana said the closest thing he had was a Maharaja Pez dispenser. 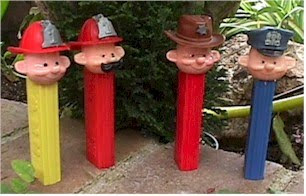 According to Pez Pals, Maharaja was one of the Pez People (or Pez Pals) a group of Pez that featured the same head with different attachments to make it unique. Some also came in a darker skin tone.

Many variations exist including a Bride, Doctor,Sheik, a Mexican boy and a ringmaster.

Each of the different "characters" were also available in many different varieties (with or without hair, mustaches, different color hats, etc.)

If you want to own one, like Dana, it will cost you a little more money. There is one on eBay right now for $54.95. Mention the coupon code "SNYDECAST" and they will be very confused.
Posted by Guy Hutchinson at 3:45 AM