On KEN P.D. SNYDECAST #38: Running On Empty Ken and Dana setup a contest regarding the TV show Today's Special.

They promptly forgot about it.

It's a quirky double feature if you are looking for a couple back episodes to listen to.


Today's Special was produced for a Canadian channel but ended up in the U.S. as part of Nickelodeon’s early line up.

The show told the story of a department store after closing. The show featured a cast of bizarre characters that seemed like the result of some children's TV writer having to put together a show at gunpoint... in the middle of the night... after downing a bottle of Nyquil.

Here are the show's characters: 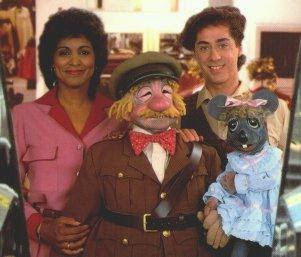 Jodie: I know I promised you bizarre characters, but she isn't one. She's the "straight man". By "straight man" I mean the person who the audience is supposed to identify with as comic things happen. I didn't mean that the guy on the show was gay (although I have my suspicions.)

Jeff: He was the guy on the show (yeah, THAT guy.) Anyway, he was a mannequin during the day, but at night they would put a magic hat on him (and said Hocus Pocus Alimagocus) he would come to life and dance. When he took the hat off he would turn back into a mannequin. Jeff was stupid so he would often tip his hat to people and freeze.

Parts of the show were filmed in a real department store called The Robert Simpson Company. The store is still standing under the name The Bay. I don't know much about Canadian department stores, but I find it odd that they would keep a mannequin that was always dressed in the same awful plaid outfit. ALWAYS.

Sam: I love this guy! He was an elderly puppet who worked in the store as a security guard. You can NEVER have too many puppets on a show.

Muffy: This was a puppet mouse that spoke in rhyme... ALWAYS. I take back my comment about never having enough puppets.

TXL: This was a computer that ran the store and talked.

There was also a mime, a magician and an old lady puppet that worked in the store. I don't want to discuss them. Sue me.

The show ran from 1981 to 1987. Originally shown without commercials, segments were edited out for broadcasts on Nickelodeon. The show is not currently available on DVD.

Here is one episode that is on YouTube in 3 parts:

Sam never really quite looked like a security guard to me. More like a Nazi soldier trying to sneak across enemy lines wearing a bowtie and a really bad Albert Einstein mask. (Or is that Wilford Brimley?)

I have a friend that looks like Sam. I wish you knew him. You would really laugh.

BTW, I was one of the many losers in the Today's Special one year contest.