Ken turned us on to a neat little film on Twitter:

Steven Lisberger directed Tron and a couple other films. One of them was Animalympics.

Animalympics is an odd little cartoon that was made originally as a two part TV special and then was cut into a feature film. 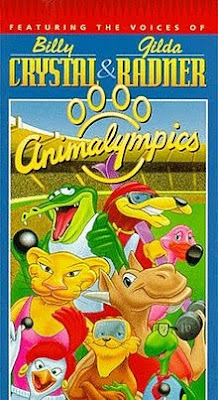 The backstory of this film is detailed on Wikipedia:

Originally commissioned by NBC in 1978, it was produced as two separate shows intended to air along with the network's 1980 winter and summer Olympics coverage.However, only the half-hour winter show made it to the small screen, as the Soviet Invasion of Afghanistan caused President Jimmy Carter to boycott the Moscow Summer Olympics. As America stayed away, NBC canceled its Olympic coverage, and Lisberger's hour-long companion special along with it. However, from its conception, producer Donald Kushner and director Steven Lisberger intended the project as a feature-length theatrical release. The resulting version, recorded and mixed in Dolby surround sound via magnetically-striped 35mm film, had its debut at the 1980 Miami Film Festival, where it was well-received. It was released in various countries overseas during the summer season that same year.
Though it never found a theatrical distributor in the U.S., Animalympics was soon acquired by Warner Bros. for home video and pay-TV release. The movie aired in summer 1984 on HBO and Showtime nationwide, as well as intermittently during the early-to-mid 1990's on The Disney Channel, and also on Philadelphia's PRISM.