After posting the 1957 guide map yesterday I thought it would be nice to share this video as well.

This video is from 1957, the same year that Dana said his dad was at Disneyland. 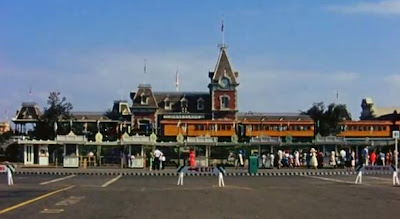 This video was originally posted back in February on the Disney History Institute blog. The blog introduced it as:

This video is taken from some 1957 pro-stock that I've owned for years.  The transfer was done on a Spirit DataCine (i.e. the same machine that Ken Burns uses to transfer historic footage for his PBS documentaries).  The entire reel is 20 minutes.  These are the best clips, none of which have ever been shown in public. 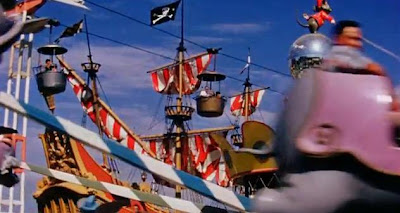 The blog also gives us this info:

* The color values here are so much brighter than those presently used in the park, leaning in places toward a florescent vibrancy.  (And yes, it does look like the film has a slight color shift in the reds, but overall, I think the colors are pretty spot on.)  During the early days of Disneyland Walt was often focused on color, particularly in Fantasyland and on Main Street.  As with his animated films, he saw color as a key element toward affecting a guest's emotional experience.  Over the years, I've interviewed many of the original art directors for Disneyland, who have told different versions of this story, that Walt used to walk through the park, making notes to repaint various buildings with a slightly different hue, that Walt sent his animators and background painters (such as Ken Anderson) into the park specifically to review the park's use of color.  Here, Fantasyland holds the dreamy qualities of a children's storybook and Main Street is washed in tones that, for me, suggest nostalgia.  During Walt's lifetime, Disneyland had many imitators, but none of the other parks understood how Walt controlled environment to create mood.


* This film was shot the month Monsanto opened the House of the Future.  Look, there's no line for the House, with only a few people wandering out its exit.


* Up through 1958, the Omnibus travelled back to the Tomorrowland lagoon (future home of the Disneyland subs).  Here, you can see it roll past Holiday Hill (AKA Snow Mountain).


* There, in by the mule train, leaning over the fence, is Owen Pope, the man with the chocolate-brown pants.  Sure, it's not the best shot of Owen Pope.  You can't see his face, but that's definitely the hat he most always wore for photographs.  He oversaw construction of the Disneyland stagecoaches and also managed the Disneyland stables.


* But my favorite sequence in the entire film occurs on the Mark Twain.  There, the Disneyland band director (Vesey Walker) conducts the band while talking to a park guest.  This reminds me of one of the things I most admire about the park as it existed 55 years ago: the park contained a unique type of open space that encouraged conversation. 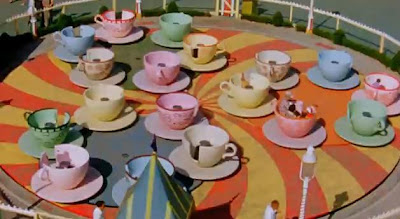