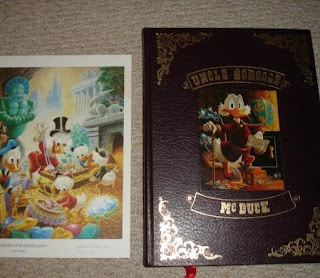 He also mentions the story of Tralla La. Here is a plot summary from wiki:

Tralla La begins with Uncle Scrooge having a hard day at his office, and it doesn't get better when he attempts to walk along the street to relax. He is followed by someone who wants some of his money for whatever reason. The stress of this way of life gets to him and he suffers a nervous breakdown. Though he improves, he can't stand to see or hear about money, as he now associates it with all the troubles that got him to this point. In order to heal, he searches for a place where money has no influence. Tralla La may be such a place, where a peaceful society without a monetary system is rumored to exist.


Scrooge and his nephews, who are there to support his healing, finally locate the mythical place in a deep valley high in the Himalayas and arrive by parachute. There they get acquainted with a more peaceful existence than to which they were accustomed.


However, as Scrooge seems to be healing he doesn't realise he brought his troubles with him. He brought bottles of his medication along; the bottle caps he discards are considered rare treasures in Tralla La and become the basis of a new monetary system! The inhabitants of Tralla La become obsessed with these new treasures. To solve the issue, Scrooge has planes drop one billion bottle caps, but this becomes too many, and the inhabitants become angry, as their fields are now covered with caps. The Ducks must flee, as they apparently cannot find peace even in an Earthly paradise. 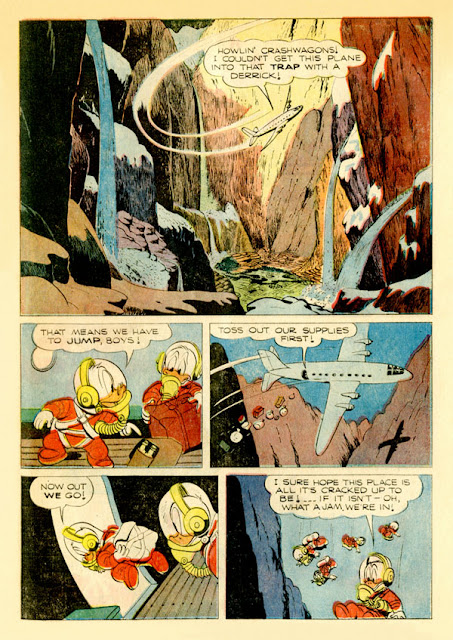 The comic was adapted into an episode of Duck Tales and it's on YouTube: