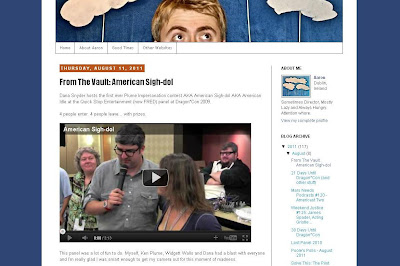 Over on aaronfever.blogspot.com a delightful video has been posted featuring Dana and Ken involved in an epic display of foolishness at DragonCon 2009.

This video is actually a small section of the live Snydecast KEN P.D. SNYDECAST #113: Nuts On The Snyde Part 2.
Anyway, this particular episode of the Ken P. D. Snydecast actually started on an episode of Nuts on the Road. You can hear that episode, hosted by Ken Plume and Widget Walls, here. It features some really funny chit chat, karaoke and talk of a movie starring George Burns, Kirk Cameron, Jesus and a banana.

The end of that show flows seamlessly (in the most abrupt way possible) into KEN P.D. SNYDECAST #113: Nuts On The Snyde Part 2.

After much talk of toilets and hair transplant balloons the show ends with a Plumey "sigh" competition. The sigh competition, titled American Sigh-dol, was thankfully captured on video and posted on aaronfever.blogspot.com. You can find that orignal post here and the video below:

Remember, DragonCon is coming up September 2-5, 2011. Plumey will be there IN PERSON... and as an added bonus if you see Aaron Poole HE WILL HUG YOU! 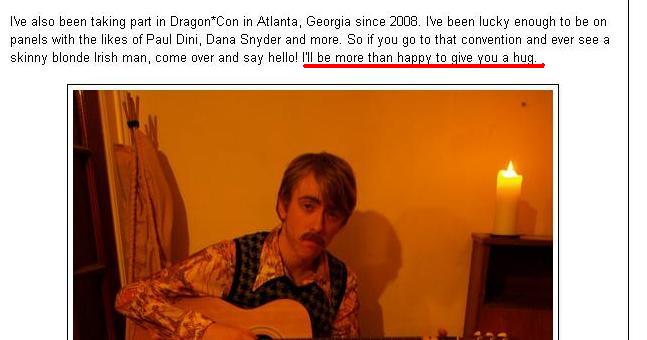 Make sure and check out Aaron's blog and Twitter feed. He's funnier than army of clowns trying to get box cutter-shaped whoopee cushions past airport security.
Posted by Guy Hutchinson at 3:54 AM

Ha! It's true. My hugs are free. But the rest will cost you.

Thanks for the shout-out! Or blog-out. I'm unsure of the qualifications online.

It's gotta be shout-out. Blog-out sounds like an illness of some kind. :)

Around the 1 minute mark... dude in the audience with the red shirt and glasses...

...I hear he dropped about 80 pounds and became "The Most Beloved Man on the Internet."

I see you! When you say you "dropped 80lbs" does that mean you broke up with a skinny chick or lost weight? Either way congrats!

Actually I may have slapped the red head next to me a couple of times. XD