Remember last year when the Broadway World Awards came and went and Dana wasn't recognized for his AMAZING performance in The Producers.

Remember how you felt? Sad. Angry. A little thirsty. Kinda gassy. Yeah. It was a tough time.

This year, let's change that feeling! Go to http://miami.broadwayworld.com/2012nominations.cfm and vote. Then have a seltzer.

These awards are the best chance for the fans to say "thanks" and "good job" to the stage performers. Dana Snyder appeared at the Riverside Theatre in Vero Beach from April 12 to May 6 in a tour de force performance as Pseudolus.

Go and nominate:
http://miami.broadwayworld.com/2012nominations.cfm
Nominations for the 2012 Awards will close on October 26, 2012 and voting will begin on November 5. Voting runs through December 31, 2012! 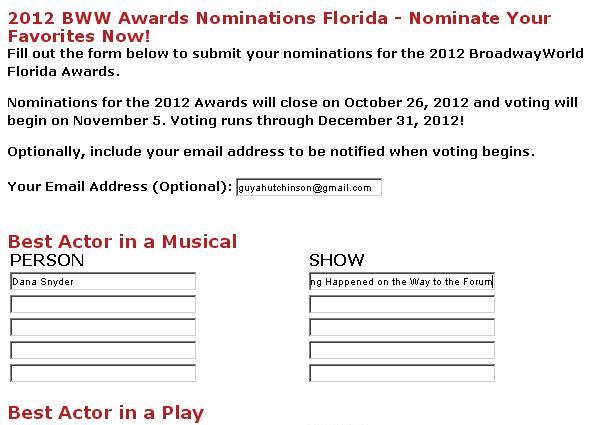