From wiki:
Captain Nice was a comedy TV series that ran from January–May 1967 on NBC. Riding the tide of the camp superhero craze of the 1960s, the show's premise involved police chemist Carter Nash (William Daniels), a mild-mannered mama's boy who discovered a secret formula that, when taken, transformed him into Captain Nice.
Captain Nice didn't behave much differently from Carter. In fact, the good Captain ran around in a pajama-like costume sewn lovingly by his mother. Carter selected the name "Captain Nice" since he already had items monogrammed "CN." His superpowers included the ability to fly, but he was nervous about doing so as he was afraid of heights. 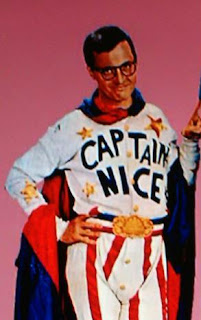 Although the show only ran for 15 episodes, a comic book and trading cards were made.