On KEN P.D. SNYDECAST #185: Semi-Elect Dana mentions seeing a majestic owl landing on a power line behind his house.

Ken then mentions how stupid owls are. 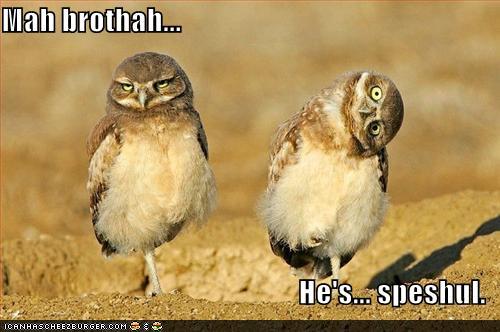 As I researched this I found the following information:

You probably have heard the phrase “wise old owl” before, so you might be surprised to learn that these birds aren't the most intelligent. Their brains are actually considered quite small for their comparative size, and geese, crows, and ravens are all thought to be “smarter.” So why are owls considered so wise?

In ancient Greece, owls were associated with Athena, the goddess of wisdom. She was thought to be accompanied by one at all times, and owls eventually gained their own reputation based on their connection with the goddess — a myth that continues to this day.

There is also the common belief that owls simply "look" smart! Unlike most birds, owl eyes are placed on the front of their heads (versus on the sides) to help them focus on prey when hunting. This wide-eyed glance gives them the impression of thinking really hard when, in reality, they are most likely just thinking about their next meal!

I don't remember where I found it, so I will pretend I wrote it. Human 1, Owl 0.

Here's a picture of an owl's brain:

Not sure what the "wulst" the "V" and the "OB" are. Perhaps that's the most juicy and delicious parts of the owl brain. Damn, that looks delicious. I just wanna dunk it into some cocktail sauce.


Well, say what you will about owls, at least they can find the center of a Tootsie Pop:

Posted by Guy Hutchinson at 8:06 AM