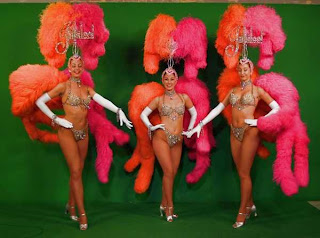 From wiki:
Jubilee! is a long-running Las Vegas Strip-based burlesque show. It opened in August 1981 and was originally produced by Donn Arden.As of 2006, this resident show at Bally's Las Vegas is the longest-running production show in Las Vegas. The Jubilee! showgirls are an icon of old Vegas. The show uses costumes designed by Bob Mackie and Pete Menefee. UNLV Special Collections houses many of the original costume design drawings which can be accessed online through the Showgirls collection from UNLV Digital Collections. Many of the show's sets date back to the original production and include the sinking of the Titanic. Jubilee!'s principal dancer from the opening night until her departure 23 years later was Linda Green; this record is still hailed in the Guinness Book of World Records.

Here's a picture of me with some Las Vegas showgirls many years ago: 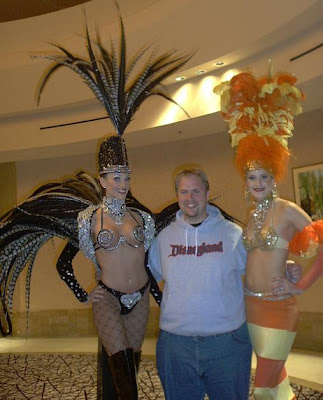 I was wearing a Disneyland sweatshirt and posing with showgirls. Yeah, I was livin' the Snydecast life even then, 3 years before the show started.

Here is a great 4 minute video celebrating the 30th anniversary of Jubilee!:

Dana mentions the Jubilee! Titanic number. Here is a look at that part of the show: