The show aired in 1990 just ten days before the death of Muppet creator Jim Henson.

The show runs about 45 minutes without commercials.

The show starts with Kermit and company walking through the Florida swamps on the way to a surprise destination.
Miss Piggy is annoyed at her surroundings, but Kermit assures her they are heading to "paradise." 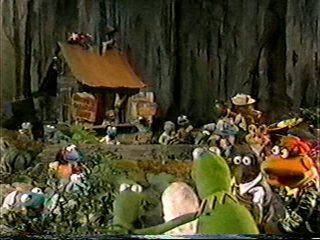 The Paradise Swamp. Ahh, I was a bit worried that "going to paradise" meant that Kermit was going to strap explosives on his body and blow himself up. A paradise of 40 untouched pigs just makes me grossed out.

At the swamp Kermit seems to be the only Muppet who wants to be here. They are told they will get to eat bugs and watch the fireworks from Walt Disney World.


Immediately everyone splits and heads to Walt Disney World. It's important to note that throughout this special it is implied at all of the WDW parks (Disney MGM Studios, Epcot Center and the Magic Kingdom) are actually one big park.

Upon arrival Kermit and company are greeted by a security guard played by Charles Grodin (who also appeared in the Great Muppet Caper.) Since they have no tickets and no money he tries to usher them away. However, Animal breaks the turnstile and lets them all in for free. This is a good lesson for children "never show any respect to Charles Grodin." 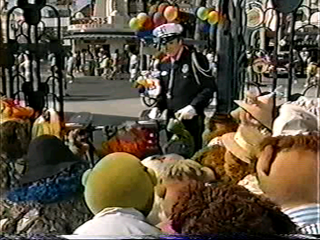 Bunsen and Beaker (who has a bucket on his head from an unfortunate incident at the swamp) wander into Disney MGM Studios. 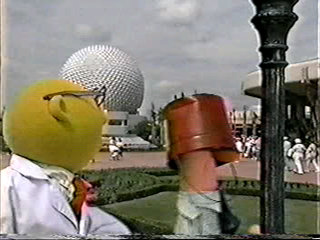 And within seconds arrive at Epcot Center. Kermit apologizes to Grodin as he and the rest of the Muppets scatter throughout Walt Disney World. Grodin begins to track the Muppets (or as he calls them: the Kizmet gang.) His misunderstanding of the pronuciation of Kermit's name is less funny than Beaker with a bucket on his head.

Of course, few things are MORE funny than Beaker with a bucket on his head...


It's a great special and shows lots of time capsule footage of WDW and some classic Muppet buffonery.

This was never released on VHS or DVD so it was hard to find for many years. Thankfully it's on YouTube in 6 parts: