"Cleaning out my old bookmarks found this old link. @danasnyder? I never confirmed. History Of Rock Written By The Losers"

The link went to an Onion article with this photo: 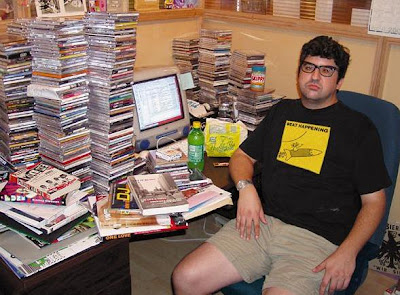 This photo is also mentioned in Dana's IMDb message board: 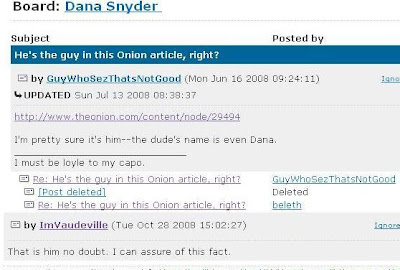 And ImVaudeville is correct, that is indeed Mr. Dana Snyder.

Dana posed for this picture years ago for a fake article in The Onion.

Here is some of that article:

BOSTON—Fifty years after its inception, rock 'n' roll music remains popular due to the ardor of its fans and the hard work of musicians, producers, and concert promoters. But in the vast universe of popular music, there exists an oft-overlooked group of dedicated individuals who devote their ample free time to collecting, debating, and publishing the minutiae of the rock genre. They are the losers who write rock's rich and storied history.

"The city of Boston is about more than just Mission Of Burma or Galaxie 500, and it's certainly about more than Boston or The Cars," said 28-year-old Dana Harris, a rock historian. "The scene in Boston is full of history, but it's also vibrant right now. Someone needs to record all the amazing things going on here, even if it means that person will never have a social life."


For Harris, rock is the only topic of conversation and the only form of entertainment. While other men his age go on dates or enjoy the sunlight, Harris haunts the rear corners of local rock clubs like The Paradise, where he sits alone, hunched over a notebook. During the day, he works in his windowless bedroom compiling facts about the city's rock history for his web site, BostonRockScene.com.


"Rock is so important to me," Harris said, gesturing to a cabinet where he files articles concerning all of the live shows he attends and detailed transcriptions of interviews with artists who live only blocks away. "If I couldn't write about music and collect music, I have no idea what I'd do instead."

You can read the rest of the article here.

Article text and photo © Copyright 2011, Onion, Inc. All rights reserved.
Posted by Guy Hutchinson at 7:46 AM

Good to know in case I lose my link it's on IMDB! I found it about 5-6 years ago. I just realized how weird I am...