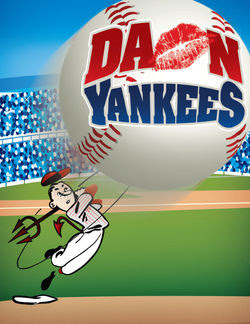 The musical comedy Damn Yankees opens TODAY at the Lyceum Theatre and runs through June 26th.

Damn Yankees opened on Broadway in 1955 and is still a fresh fun show today. The longevity of the show is partially due to it's great story which borrows from the Faust legend.
Yeah, I didn't know what that meant either. Click the link for a Wikipedia page.

Bottom line is that Dana will be on stage today entertaining the good folks of Arrow Rock and anyone else lucky enough to get there.

Go to the Lyceum Theatre website for tickets. On the site you can also read this article on the show.

It reads in part:

Damn Yankees is a musical comedy with a book by George Abbott and Douglass Wallop and music and lyrics by Richard Adler and Jerry Ross. The story is a modern retelling of the Faust legend set during the 1950s in Washington, D.C., during a time when the New York Yankees dominated Major League Baseball. The musical is based on Wallop's novel The Year the Yankees Lost the Pennant.

Damn Yankees ran for 1,019 performances in its original 1955 Broadway production. Middle-aged baseball fanatic Joe Boyd trades his soul to the Devil for a chance to lead his favorite team to victory in the pennant race against the New York Yankees. Mr. Applegate, as he is known, transforms Joe Boyd into young baseball sensation Joe Hardy, who turns the hapless Washington Senators into a winning team, only to realize the true worth of the life he’s left behind.

Dana Snyder returns to the Lyceum after appearing in last year’s production of the Producers, as Max Bialystock. He has performed in theatres around the country, and in film, television and radio. His voice is most recognizable as that of Master Shake on Adult Swim's AQUA TEEN HUNGER FORCE. 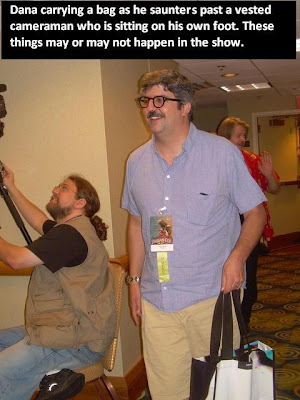 Posted by Guy Hutchinson at 5:38 AM