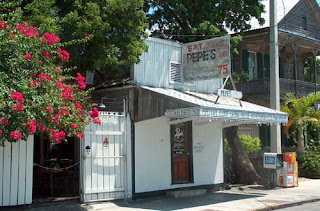 On KEN P.D. SNYDECAST #166: What’s New Wit You Dana mentioned that recently he dined in the oldest restaurant in Key West.

Pepe's Cafe opened in 1909 on Caroline Street just a few blocks from the ocean. The exterior of the place shows it's age, but in a good way.

The sign above the restaurant is wonderfully worn and advertises a 75 cent breakfast. The menu disagrees, but you can get a bowl of grits for under $2. 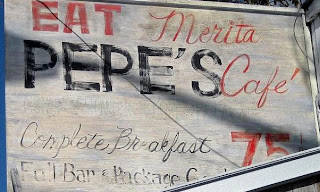 The restaurant's website says they " just celebrated" their "100th anniversary" which means that either they haven't updated the site recently or that party rocked for almost 2 years.

I prefer to think it's the latter.

Pepe's serves breakfast, lunch and dinner. They pride themselves on their steaks.

They do have a webstore where you can buy a 2009 calendar (wow, that must have been some party!) 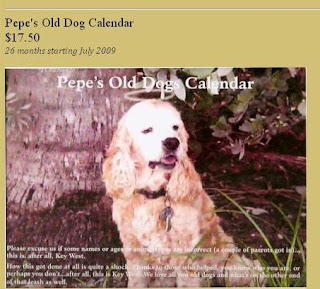 You can also get gift certificates, beer cozies and this clever little item:

a Pepe's ice scraper that says "We wish you were here, too!"
Posted by Guy Hutchinson at 6:08 AM