Recently Aaron Poole of Cabin Fever was asked this:

Aaron responded as such:

Anyway I checked Google - which I guess doesn't exist in Austrailia (where Scott lives) or Ireland (where Aaron lives) and found the podcast and a few more. I will list them below. 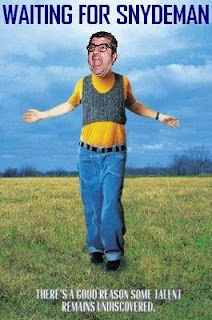 I wanted to mention that Cabin Fever disapeared back in April of 2011 and the returned unannounced in January of 2012.

It should give us Snydecast fans reason to hope! Hopefully Dana and Ken will smite all pretenders to the podcasting throne.

Speaking of pretenders... John J. &  I interviewed Aaron recently
He recapped the end and rebirth of Cabin Fever. I made a YouTube clip of it so you can stare at our silly faces as we talk:

Anyway, there are quite a few crossover episodes between Cabin Fever and The Ken PD Snydecast. I did a post the other day about Cabin Fever #87: To Kill a Leprechaun.That episode featured Ken Plume joining Brian and Aaron for a funny chat.

The episode that Scott and Aaron were tweeting about was probably this one:

CABIN FEVER #38: Episode V - The Snyder Strikes Back
Here is the asitecalledfred.com description:


It is a dark time for Cabin Fever. Although Ken and pHitzy have recorded a perfectly good show, the two rejects Dana and Aaron, in an attempt to stay relevant, spew rubbish for an hour. Many subjects are raised in an effort to hide their sense of rejection, but ultimately they fail…

If you want another Ken guest appearance, there is also this one:

CABIN FEVER #23: Are You There Ken? It’s Me, Brian
Here is the asitecalledfred.com description:


While the boys are waiting for their shiny new recording equipment to arrive they have a chat with Quick Stop Duck-In-Charge Mr. Ken Plume sur la telephone. There’s not much in the way of preparation or content but plenty in the way of innuendo. The Cabin Fever romance continues unabated and also unrequited while Aaron admits his desire to dress-up for the camera. This one is perfect for anyone with a short attention span.

Do you remember the big 2 part crossover from January 2009?

Check these out (with FRED descriptions):

CABIN FEVER #54: Fever Snyde - Part 1 - Worlds collide! Through the use of miraculous technology, the Cabin Fever duo of Brian and Aaron round a cyber-corner and come face-to-face with Ken Plume and Dana Snyder of Snydecast fame. What will happen? What won’t?!?! This is Part 1. Check for Part 2 in the Ken P. D. Snyde-Cast #80.

KEN P.D. SNYDECAST #80: Snyde Fever - Part 2 - Worlds collide! Through the use of miraculous technology, the Cabin Fever duo of Brian Fitzpatrick and Aaron Poole round a cyber-corner and come face-to-face with Ken Plume and Dana Snyder of Snydecast fame. What will happen? What won’t?!?!

If that isn't enough, there is an episode of the Snydecast CALLED Cabin Fever:

KEN P.D. SNYDECAST #34: Cabin Fever - Ken & Dana return with a debate on the definition of what can be called a sitcom, continue to refine their own pitch, discuss the awkwardness of public interaction, and fulfill yet another outstanding wager.

Cross your fingers and keep hitting refresh until your crossed fingers bleed!
Posted by Guy Hutchinson at 1:16 PM