With many of the Snydecast episodes the title is a clever reference to something that was discussed on the show. Titles like "iSnyde" or "Sausage Gravy On A Trip Through The Mountains" come to mind.

With "Comedy Tonight" the title was never mentioned in the show and it's such a common statement you may have just assumed it was... well... just a title.

"Comedy Tonight" is the song that opens and closes "A Funny Thing Happened On The Way To The Forum"... at least in the movie version. I have never seen the stage show...

But if you wanna know if the song is in the stage version...

Dana is appearing in "A Funny Thing Happened On The Way To The Forum" from April 12 through May 6th at the Riverside Theatre in Vero Beach Florida. 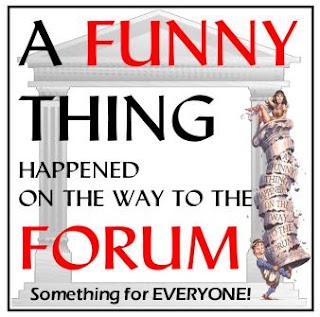 Visit riversidetheatre.com for more info and tickets to "A Funny Thing Happened On The Way To The Forum"!
Posted by Guy Hutchinson at 5:45 AM