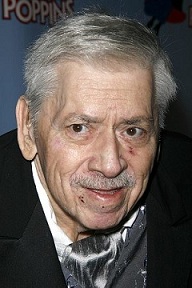 Legendary Disney composer Robert Sherman died yesterday in London at the age of 86. Together with his brother Richard he wrote more motion-picture musical song scores than any other songwriting team in the history of cinema.

They wrote music for Mary Poppins, Sword in the Stone, The Jungle Book as well as non Disney films such as Chitty Chitty Bang Bang and Snoopy Come Home.

I have known of the Sherman Brothers for much of my life, but I learned how to tell them apart from the Snydecast.

Richard lived in the USA and Robert lived in London. Dana said you could tell them apart by thinking "British Bobby" (the name for a policeman in England and a common nickname for Robert.)

When I heard that Robert had died I couldn't think of which brother he was... untill I thought, "British Bobby."

Richard Sherman had quite an amazing legacy and was talked about on two Snydcasts. Between the silliness, Dana  and Ken show genuine fondness for the duo and their music.

Most notably, KEN P.D. SNYDECAST #166: What’s New Wit You features a discussion of the documentary The Boys: The Sherman Brothers' Story .

The documentary focuses on the fact that the two brothers worked very closely together but were not close at all.


On KEN P.D. SNYDECAST #134: The Short One That Isn’t So Much Ken recommends listening to the "story meetings" between The Sherman Brothers and Mary Poppins writer P. L. Travers.

Ken describes the recordings as being "very fun" and describes P. L. Travers as "just crotchety and picky and just a horribly stuffy woman."

The story meetings are on youtube (audio only) and are a really interesting listen. Here is part 1:


You can find the other 4 parts (and the rest of that soundtrack) here.


In addition, here is a great video of The Sherman Brothers with Walt:

This wonderful video was made by Disney to pitch the idea of The Carousel of Progress attraction for the 1964 World's Fair. The clip starts with Walt and The Sherman Brothers at the piano playing the theme "There's a Great Big Beautiful Tomorrow" watch for the GE logos on their backs.

Afterwards Walt gives us a preview of the attraction which opened at the World's Fair and then moved to Disneyland and still runs today at Walt Disney World in Florida.