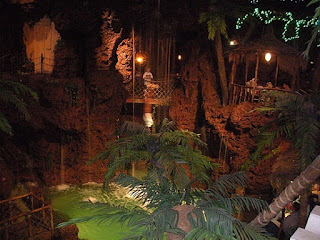 You may have seen the restaurant parodied on South Park.
From wiki


The South Park episode "Casa Bonita" prominently features the Colorado branch of the restaurant. Other episodes that mention it briefly are: "Quest for Ratings" (where a clock is labeled as showing the time at Casa Bonita), "You Have 0 Friends" and "201" (where the restaurant is reportedly destroyed). Additionally the building that houses South Park Studios was named after the restaurant.

Anyway, I found this video which gives a great overview of what a night a Casa Bonita would be like... without the lousy food.

They even show the the small passage Dana mentioned that the food is slid through.

It also shows the cliff divers, part of a puppet show and a juggling gorilla.

The only downside is it's someone's family video and so you have to watch them at points. I am sure they are nice people but watching someone's home movies is always a bit annoying. Especially when you don't know them.

Nonetheless they made a nice HD video of Casa Bonita and you should take a look:

Posted by Guy Hutchinson at 8:17 AM