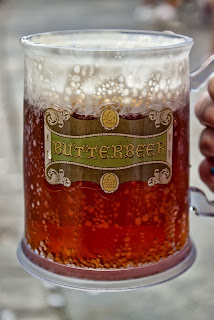 The Harry Potter wiki says:
Butterbeer is a popular wizarding beverage described as tasting "a little bit like less-sickly butterscotch."

Butterbeer is served cold in bottles and hot in "foaming tankards".In Hogsmeade, it's sold at The Three Broomsticks and The Hog's Head, although the fact that the latter pub's stock was described as "very dusty" suggests that it was not sold there very often. In Diagon Alley, the drink has been known to be sold at the Leaky Cauldron.
At the Hog's Head, customers are charged two sickles per Butterbeer (£0.60 approximately), but it is not certain whether this is a universal price for the drink, or if the price of the drink varies from location to location. 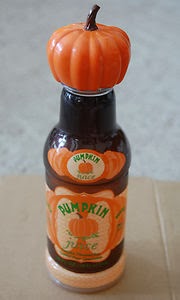 Pumpkin juice is a beverage made from pumpkins. Manufactured since 1837 by London Pumpkins & Sons, it is extremely popular in the wizarding world, particularly among the students at Hogwarts School of Witchcraft and Wizardry. It is drunk at any occasion, such as breakfast, lunch, at feasts or on other occasions. It seems to have taken on the same role that orange juice has in the Muggle world, though orange juice is sometimes consumed in the wizarding world as well.
Pumpkin juice is readily available, and can be purchased on the Hogwarts Express. Severus Snape threatened Harry in his fourth year that he might slip Veritaserum in his evening pumpkin juice while believing that Harry stole his potion ingredients. Dolores Umbridge offered Harry Potter pumpkin juice in 1996 when she wanted to secretly administer Veritaserum to him, but he chose tea instead. Prior to a Quidditch match in his sixth year, Ron Weasley believed that Harry had slipped Felix Felicis into his morning juice to help him play perfectly.


In the podcast Ken says "pumpkins don't go bad" to which Dana replies "haven't you ever seen one a week after Halloween?" 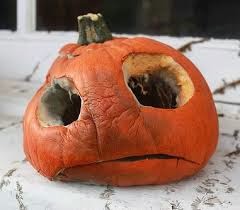 The label does indicate it needs to be refrigerated, but only after opening.
Posted by Guy Hutchinson at 8:12 AM