Ken and Dana are both set to appear at the Melbourne Indie Filmmakers Festival starting September 6.
This article from Space Coast Daily talks about the event and reads, in part:
BREVARD COUNTY • MELBOURNE, FLORIDA – The Melbourne Independent Filmmakers Festival (MIFF) is set for Sept. 6-7, featuring a rarely seen 1969 beach movie shot in Brevard County, Cartoon Network Adult Swim personalities, dozens of quality independent films from around Florida and the globe, and the return of “Real Food Real Kitchens.”


Melbourne_Film_Festival_Blame_It_on_Florida_388
Each year, the MIFF brings some of the best independent films to an enthusiastic Florida audience and promotes the filmmaking arts while raising money for good causes. The theme of this year’s event is “Blame it on Florida!” in honor of our exclusive presentation of one of the earliest successful independent films, and it hasn’t been seen in over 35 years. (MIFF image)


The 15th annual event will be held at the Premiere Theaters Oaks Stadium 10, 1800 W. Hibiscus Blvd. in Melbourne, Florida.


Each year, the MIFF brings some of the best independent films to an enthusiastic Florida audience and promotes the filmmaking arts while raising money for good causes. 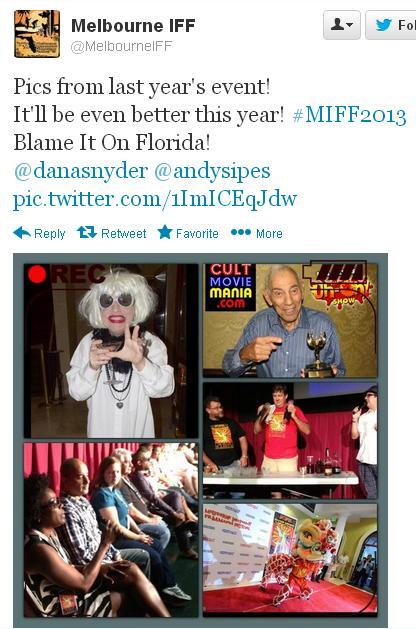 At 9:15 p.m. Friday, the MIFF is proud to feature the triumphant return of comedian Dana Snyder (Master Shake from “Aqua Teen Hunger Force,” “Squidbillies”). If you missed it last year, we’re sure you heard about it.

On Saturday, Sept. 7, the show begins early at 9 a.m. with the Florida Filmmakers Matinee, which will showcase an exceptional selection of short film projects from around the State of Florida.


At 1 p.m., the Meet the Filmmakers Roundtable Q&A will give a chance for the audience to interact with the filmmakers themselves.


At 2 p.m., special guests Zak Knutson (“MILIUS”) and John Schnepp (“The Death of ‘Superman Lives’: What Happened?”) will discuss their film careers and how to make a meaningful documentary for today’s audience and the future.


At 3 p.m., director Zak Knutson presents, by exclusive engagement, “MILIUS – the John Milius Documentary.” Directed by Joey Figueroa and Zak Knutson, the film details the life story of one of the most influential and controversial film directors in the history of Hollywood, John Milius (“Apocalypse Now,” “Jaws,” “Big Wednesday,” “Conan The Barbarian,” “Dirty Harry,” “Red Dawn”).

Posted by Guy Hutchinson at 2:00 AM