a closer look: The Sears-Vincent Price Collection of Fine Art

KEN P.D. SNYDECAST #26: The Bunny Hop talks of the Co-Stars albums including the one featuring Vincent Price.

Ken mentioned that Vincent lent his name to many ventures including the The Sears-Vincent Price Collection of Fine Art a collection. 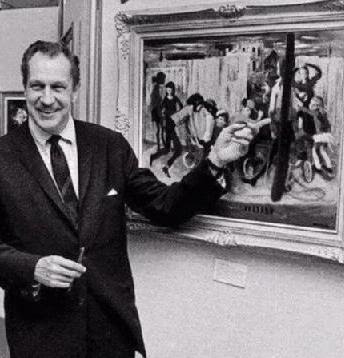 Since the beginning of time (actually 1895) Sears has sold art to the masses. Still, in 1962 they noticed that most of the general public did not own any fine art.

So they decided to scare the hell out of the American public.

Vincent Price was selected by the board of trusties to 'seek out little old ladies and suck the blood from their necks... then sell them art.'

Luckily for Sears, Price was a connoisseur of fine art and had collected art and lectured on the subject.

Prices ranged from $10 to $3,000. Each painting came with the same quality guarantee that Sears puts on its other products.

The program ended in 1971. In the years between Sears customers bought over 50,000 pieces of fine art.
Posted by Guy Hutchinson at 12:01 AM