It was essentially some beef stir fry. 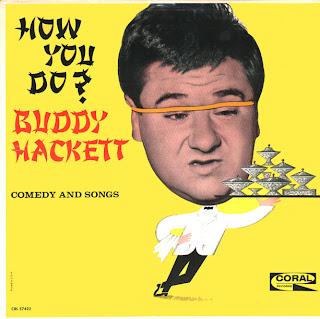 Buddy Hackett had a long career playing many, many notable characters. You may have seen him voice Scuttle in The Little Mermaid or his cameo in Scrooged.

Buddy was most successful doing stand up and his numerous appearances on the Tonight Show with Johnny Carson. It has been claimed that he appeared on there more than anyone else.

Here is one of Buddy's routines as "The Chinese Waiter". Obviously, this kind of racial comedy wouldn't fly today and often it's hard to even find outdated racial humor funny in modern times.

Still, in it's time, this was a very popular album. Take a listen:

Serve at once over steaming cooked white rice, dry noodles or corn.

Posted by Guy Hutchinson at 6:21 AM