You can read the full review here.

In the opening to “A Funny Thing Happened on the Way to the Forum,” the prologue promises
“Comedy Tonight.” And Riverside Theatre’s brilliant artistic team delivers it big time, from beginning to end in a thoroughly professional production.


Riverside’s cast lives up well to the storied history of comic actors who have brought this show to life, including Zero Mostel, Phil Silvers, Dick Shawn, Jack Gilford and Nathan Lane.

Here, it is led by Dana Snyder, who was Max Bialystock in Riverside’s production of “The Producers” earlier this season. Although Snyder has his own understated, droll style (and, oh my what a rim-shot funny fake death scene), you can’t help but think Phil Silvers when watching his Pseudolus. In a way, his is a delicious homage to theater legend which has that Silvers turned down the role of Pseudolus for the original Broadway production because of his glasses. (Later, Silvers was Pseudolus for the 1972 production but was replaced after suffering a stroke.) 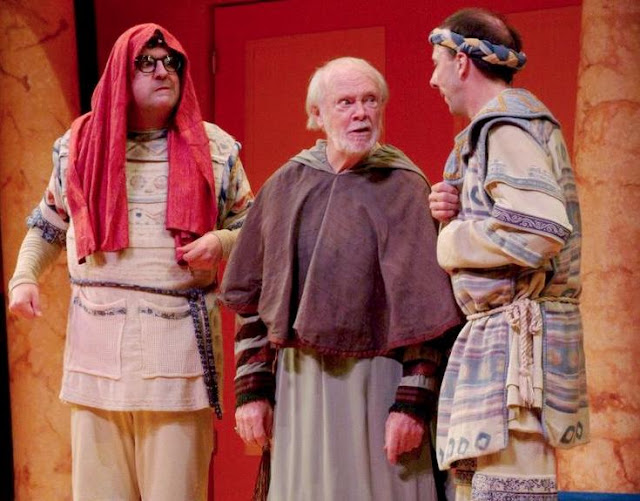 
"A Funny Thing Happened On The Way To The Forum" in open now through May 6th at the Riverside Theatre in Vero Beach Florida
Visit riversidetheatre.com for more info and tickets!
Posted by Guy Hutchinson at 7:46 AM