The other day Ken tweeted this: 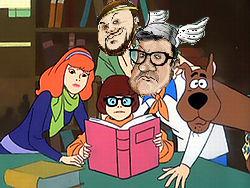 At least it isn't dead.

Ken also tweeted this to me recently:

You recall the Snydecast's battle with Wikipedia, I am sure.

Back on November 10, 2011 I put the Snydecast and Ken back on Wikipedia. Read about that here.

You may also remember that back on November 11, 2011 they were both deleted. Read about that here.

Well, Wiki has a road block in place for "Ken Plume" and "Ken plume" to prevent recreating a deleted article. But they don't know Kenneth Plume: 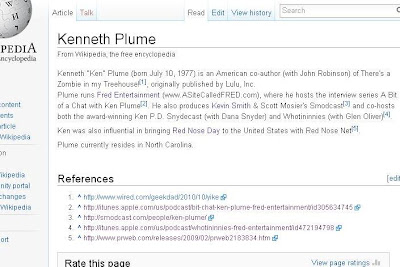 So far, it's still up:
http://en.wikipedia.org/wiki/Kenneth_Plume
It's lasted longer than the last one.

Let's hope it stays for good this time.

EDIT: Still up (now for over 24 hours) and it's starting to look like a page worthy of Plumey: 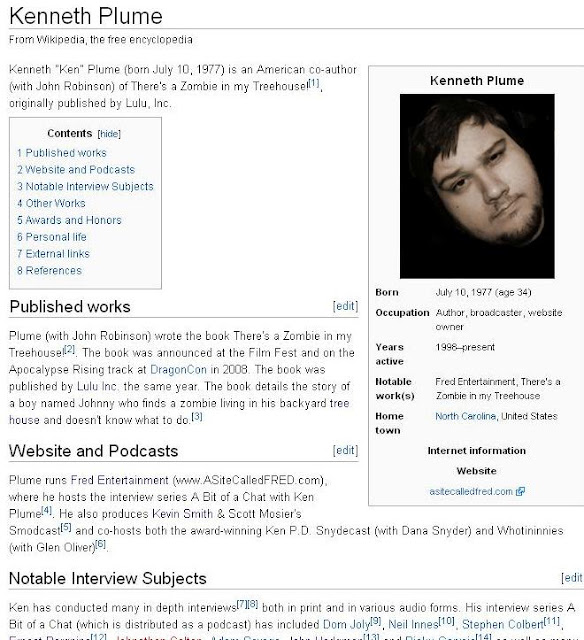 Posted by Guy Hutchinson at 6:34 AM

If the powers that be don't let this article stand, I say we undertake a massive DDoS attack on Wikipedia.

But seriously, the article does look very good and is well referenced. If there's one problem, it's that it doesn't really indicate why Kenneth Plume is notable, or it doesn't make it that clear. And as you probably remember, that is a requirement for internet-based subjects on Wikipedia. If you could find some way to work that in or make it clearer with a reference, I think it will almost surely be allowed to finally live.

After looking through many, many Wikipedia articles I noticed that the standard for published authors on Wikipedia is much lower than the standard for internet personalities.
Because of this I listed Ken as an author first (as you know he wrote Zombie in my Treehouse.)

One of the other issues with Wikipedia is that they want everything to be "sourced". I am hoping to find more news articles that mention Ken so I can help solidify his spot on wikipedia.