Yesterday on the blog we talked about Ken PD Snydecast #45: Danercise where the boys talked about Olive Garden.

Dana: I don't want advertising from the Olive Garden.
Ken: Come on! It's almost Italian food!
Dana: That's very true!
Ken: It's Italian-esque.
Dana: Italian style flavors.
Ken: If someone gave a restaurant to Chef Boyardee.
Dana: Exactly like Chef Boyardee opened a restaurant. Franco American relations have never been stronger.
Ken: (Italian accent): If it's a red-a sauce-a it's got to be Italian! 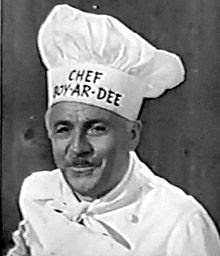 Chef Boyardee was a real dude. His name was actually spelled Boiardi.

Here is some info from wiki:
Boiardi was born in Piacenza, Italy, to Giuseppe and Maria Maffi Boiardi.


In 1917, he supervised the catering for the reception of President Woodrow Wilson's second wedding.


In 1926 he opened his first restaurant, Il Giardino d'Italia, whose name translated as “The Garden of Italy,”in Cleveland, in 1926.


His sauce was so popular he began to sell it in old milk bottles. It expanded to a profitable business.


Boiardi sold his products under the brand name “Chef Boy-Ar-Dee” so that his American customers could pronounce his name properly.


Boiardi's company made and prepared millions of rations for American and Allied troops during World War II, and for his efforts he was awarded a gold star order of excellence from the United States War Department.