The conversation involves a cel art dealer Dana saw at a convention.

Ken asked if he had artwork from "The Littles":


Here is a cel from that show: 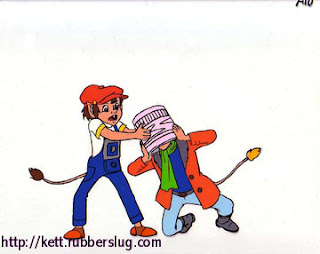 If you are unfamiliar with cel art here is a definition from wiki:

A cel, short for celluloid, is a transparent sheet on which objects are drawn or painted for traditional, hand-drawn animation. Actual celluloid (consisting of cellulose nitrate and camphor) was used during the first half of the 20th century, but since it was flammable and dimensionally unstable it was largely replaced by cellulose acetate. With the advent of computer assisted animation production, the use of cels has been practically abandoned in major productions. Disney studios stopped using cels in 1990 when Computer Animation Production System (CAPS) replaced this element in their animation process.


Ken says he prefers production art because they were done by the actual artist (where as the colored cels were traced by the art department.)

Here is a piece of production art from a Laurel and Hardy cartoon: 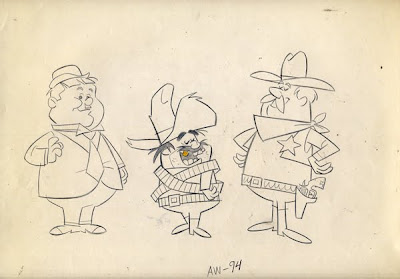 Animation cel art is a rather inexpensive hobby to get started on. Go ahead and get some today!

Or don't, makes no difference to me.
Posted by Guy Hutchinson at 5:03 AM