Ringing in the New Year with The Snydecast 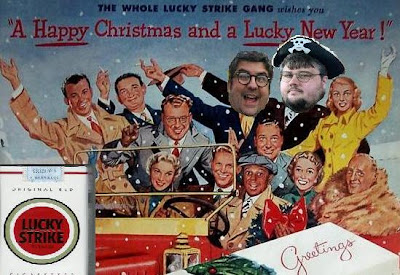 As we look forward to 2012, take a look back to 1949. This wonderful movie theater promo features the death of Old Man 1949 and a bunch of guys singing to us as they sit on a champagne glass.

Here are some of the New Year podcasts that the boys have produced in the past - with original descriptions from asitecalledfred.com:


Ken & Dana return to greet a brand new year with an ostensible year-in-review, but instead get to chatting and a bickering with each other in an over-long episode packed with something. Lots of something…


Dana & Ken return after another of their epic absences with a special look back at the year, plus a pledge for the year ahead.


[adult swim]’s Dana Snyder and Ken Plume’s weekly chat podcast returns with discussions of obscure menu items at landmark Hollywood restaurants, some movie that Dana has coming up, Ken’s attempts to conquer the ukulele, and more…

Posted by Guy Hutchinson at 3:00 AM