Sydecast Christmases of the Past

Recorded back to back in 2006, these episodes feature Dana and Ken sharing songs from their holiday CD mixes. You get a sample of a most of the songs they mailed out that year.

First you get to hear Ken as David Seville and Alvin, Simon and Theodore. The words "Go to Hell, Dave" have never sounded so adorable. 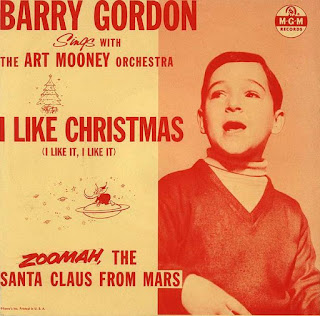 Barry Gordon's "Zoomah, The Santa Claus From Mars" and Troy Hess' "Christmas on the Moon" compliment each other perfectly with wacky space themed holiday tunes warbled by kids.

Also on the boys' CDs are a pair of monster themed songs 'A Monster's Holiday' and 'Monster Christmas Mash'.

Dana and Ken go through most of the tracks on each of their CDs. Ken's features music he found listenable.
Dana found his CD, of mostly novelty tunes, to be more listenable.
For example Ken included a track by the Flaming Lips. Dana's reaction to it is priceless.

These episodes are great to spin as you wrap presents or a background to your office holiday party.

As a bonus, here is one of Dana's selections Crackerjack Christmas (by Captain Kangaroo) in it's entirety:

Posted by Guy Hutchinson at 6:15 AM