Ken and Dana on RedNoseNet.com 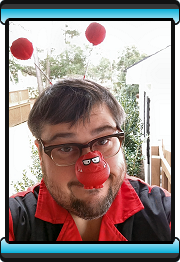 At around 11:35 Ken dialed out to Dana... and got his answering machine.

Ken berated Dana's machine for a few minutes before Dana connected and said his phone had never rung.

They then went into a conversation about the lack of donations. So:

Anway, then then talked about Ken's state of exhaustion, pig anuses doubling as calimari, some octopus that Dana ate and Dana's trip to NYC.

I hope it sticks, it's almost as good as Dr. Wienerbreath.

Posted by Guy Hutchinson at 9:12 AM