KEN P.D. SNYDECAST #188: Die Abby has a moment where Ken admonishes Dana for using the term "gypped" and says it's a slur against Gypsies.

Is that true? Or is it an urban legend, like the belief that the term "rule of thumb" has etymological origins in a law that limited the maximum thickness of a stick with which it was permissible for a man to beat his wife. (It doesn't, btw.)

So, who better to turn to to find the origin of "gypped" than Popo's sister, Ann Landers! 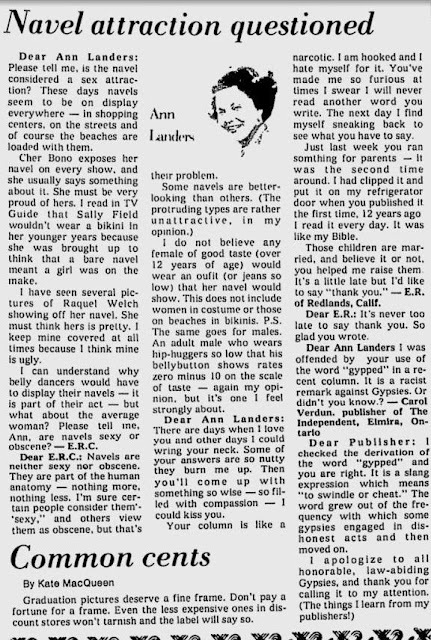 After a long discussion of the obscenity or sexiness of navels and a letter from a reader who admits to wanted to wring Ann's neck we get this:

There it is! Stop using the term "gypped"! It's rude and offensive. Thanks Ann Landers! From beyond the grave you have helped the Kenketeers be less jerky!