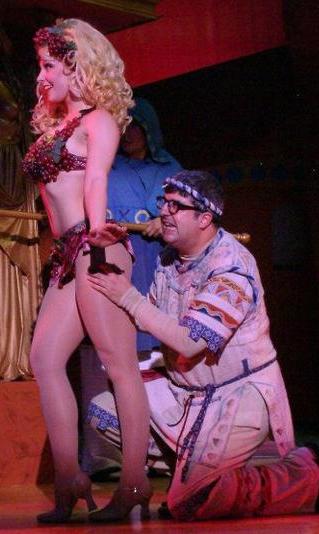 This weekend marked the end of the run of A Funny Thing Happened on the Way to the Forum at the Riverside Theatre in Vero Beach, Florida.

The show was a hit and really looked like a lot of fun. If you haven't seen it yet, check out this wonderful batch of highlights from YouTube:

The looks like a riot and I am sure we will here about it on future Ken PD Snydecasts. Reviews were extremely positive with TCpalm.com calling  it "a hit"  and  Pam Harbaugh of floridatoday.com writing:

Riverside's 'Forum' is as funny as it gets
Looks like the cultural season is winding down not with a whimper, but a bang.
It began early, on Thursday evening in Vero Beach, at Riverside Theatre’s opening of “A Funny Thing Happened on the Way to the Forum.”
All you needing a little lift should make plans to see one of the funniest productions I’ve seen on stage.


The web page for the show is still up and contains some gems such as Dana's bio:

Dana Snyder* / Pseudolus
DANA is thrilled to be returning to Riverside after Playing Bialystock in last years production of The Producers. Other credits include, ART, Guys and Dolls, Tuna Christmas, Caine Mutiny Court-Martial , Charley's Aunt, Wait Until Dark, Damn Yankees, 1940's Radio Hour, and Sylvia. On television, Dana is most associated with the voice of Master Shake on Adult Swim's Aqua Teen Hunger Force He is most recognized in the animation world where he has done hundreds of tv shows  . Here are some other cartoons he has recurring parts that you may never have heard of! Nickelodeon's Penguins of Madagascar, Disney's Fishooks, Adult Swim's Venture Brothers and Squidbillies, Cartoon Network's Adventure Time, MAD, Flapjack, and Chowder among many others! He sends all his thanks to the great gang here at Riverside (kiss up) and all his love to his wife Sweetie (double kiss up for letting him be away for 7 weeks)! He dedicates his performance here to his incredible Aunt Sherry! 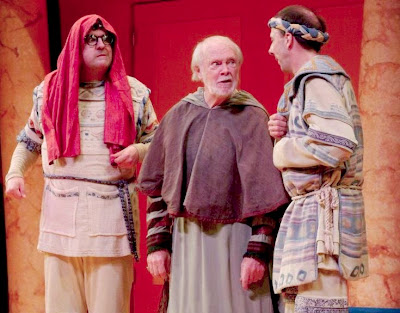 Plus I know a few Snydecast listeners were able to see the show. I even got a chance to speak to a few:

Another wonderful chapter in the career of Dana Snyder is finished. Next up? I don't know.... but I hope it includes some new Snydecasts!
Posted by Guy Hutchinson at 9:40 AM