Here is something pretty neat that popped up on my radar last night:


Here is the synopsis of the project:

The Sonnet Project is a year-long internet-based, video exploration of Shakespeare’s great love poems.  We will film all 154 sonnets, performed by 154 different actors in 154 unique locations throughout the five boroughs of New York City.


Then, beginning at the Bard’s 449th birthday party we will begin to release the videos, three per week, for one full year.  The culmination of the project, on Shakespeare’s 450th birthday, will be marked by the release of a full Sonnet Project Anthology, complete with special features exploring the textual nuances of the language, behind-the-scenes footage and interviews with the creators and actors.


Throughout the release year, we will work with web designers to create an interactive Sonnet Project website that will be available for educators and Shakespeare-lovers of all ages.  We will develop a Sonnet Project mobile app for the delivery of each new sonnet video, and to provide access to text analysis and information about the NYC film locations.  We will create sonnet-based walking tours of NYC neighborhoods, and develop sonnet scavenger hunts making use of QR codes and mobile technology.


The year will also be peppered with sonnet-based events that will bring together theater artists for explorations of the poetry through varying artistic aesthetics.  By developing this intensive program, we plan to open up these nuggets of beauty to a global audience.  Basing the program in NYC brings the language to bear in a contemporary, urban setting and shines a light on the language in a way that is accessible for today’s audiences.


Also, because the sonnets are short and easily digested, they provide an opportunity for audiences to experience Shakespeare on a day-to-day basis.  In this way, we hope to embed Shakespeare into the daily lives of people across the globe.
Our goal is to reach an audience of 1,000,000 by Shakespeare’s 450th birthday.

You can go here to donate:
http://www.kickstarter.com/projects/1384441698/ny-shakespeare-exchange-sonnet-project-and-island

Among the benefits of donating is this: 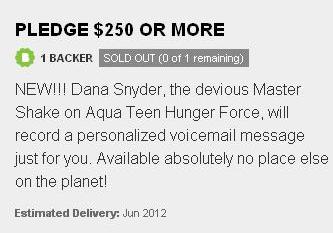 Unfortunately it looks like someone already swooped it up. I hope it's a listener!

Still, go give em some money. It's the arts. They are worth supporting.

I wonder if for another $250 you could get Plumey to do you voicemail message in his Dana Snyder impression...
Posted by Guy Hutchinson at 9:55 AM