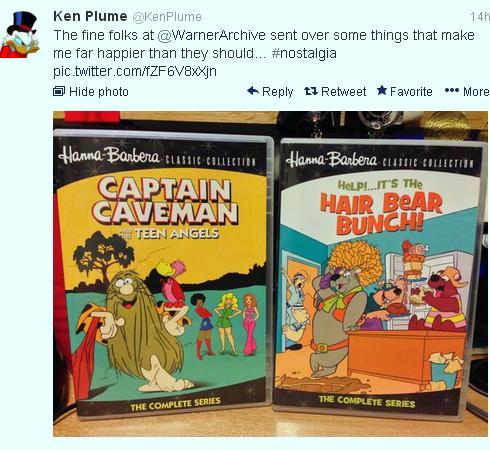 Yesterday we checked out the Hair Bear Bunch. Today, it's time for the Captain.

FROM WIKI:
Captain Caveman and the Teen Angels centers on the mystery-solving adventures of the Teen Angels—Brenda, Dee Dee and Taffy—and their friend Captain Caveman (or Cavey for short), a prehistoric caveman whom the girls discovered and thawed from a block of ice. The concept and general plot for the show was seen as a parody of Charlie's Angels (which also aired on ABC). It also borrowed heavily from other Hanna-Barbera shows such as Scooby-Doo and Josie and the Pussycats, among others. Captain Caveman was also on the "Scooby Doobies" team on Laff-a-Lympics.
Captain Caveman's powers include super-strength, a variety of useful objects hidden inside his fur, and a club that allows him to fly and from which pops out different tools he uses to fight crime. His trademark is his battle cry of "Captain CAAAAAVEMAAAAAAANNNN!" Captain Caveman's voice was provided by Mel Blanc.
The first and second seasons of the show remained part of Scooby's All-Star Laff-A-Lympics and Scooby's All-Stars through 1979. Cavey and the girls also participated in sporting competitions as part of "The Scooby Doobies" team on the half-hour "Laff-A-Lympics" segment. In March 1980, Captain Caveman and the Teen Angels were given their own half hour show with 16 new episodes combined with reruns from 1977–1979. A total of 40 11-minute episodes were produced (16 in 1977–1978, 8 in 1978–1979 and 16 in 1980).
Like many animated series created by Hanna-Barbera in the 1970s, the show contained an inferior laugh track created by the studio, one of their last productions to do so.


This show was a lot of fun. I bet you'll agree: