On KEN P.D. SNYDECAST #200: Hot Tots Dana mentions his upcoming performance in The Nerd at the Lyceum Theatre in Missouri. CLICK HERE FOR INFO AND TICKETS.

According to wiki, The Nerd  is a two-act comedy written by American actor/playwright Larry Shue. Actors who have taken on the title role include acclaimed British comedian Rowan Atkinson. It was the top grossing American play in London's West End in 1986.

It starred Mark Hamill and Robert Joy and was directed by Charles Nelson Rielly. 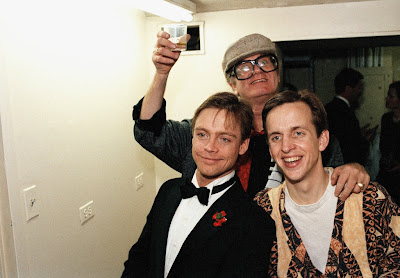 Anyway, its about a nerd that hangs out with a non-nerd and the bond they create with their differences. Should be like the Ken PD Snydecast... if one of them wasn't a nerd.

CLICK HERE FOR INFO AND TICKETS.
Posted by Guy Hutchinson at 8:59 AM

Ooh, I'm so going to that show! Not sure what day yet, and I may just have to go it alone. But damn it, I'll be there with bells on!