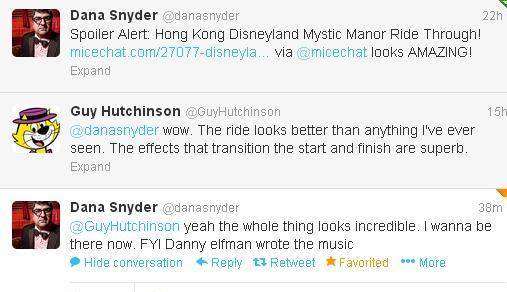 Dana tweeted this link last night.It's all about the new Mystic Manor attraction.

From wiki:
Mystic Manor (Traditional Chinese: 迷離大宅) is an upcoming Haunted Mansion-esque attraction in the planned Mystic Point section of Hong Kong Disneyland. The attraction will feature a "trackless" ride system, though what kind has not been specified. It is possible that it may be similar to the system used on Pooh's Hunny Hunt attraction, the vehicles of which move freely throughout the attraction through the use of a local positioning system. The attraction will feature a musical score by Danny Elfman. Continuing the Society of Explorers and Adventurers theme of Tokyo DisneySea, the attraction tells the story of Lord Henry Mystic and his monkey Albert. Having recently acquired an enchanted music box, Albert opens the box and brings everything inside the house to life.

Hey, what's the deal with the old Snydecasts? I can't download them.

Due to bandwidth costs the older episodes aren't online at the moment. Hopefully Ken puts them back.